Train Your Brain For Healthy Eating

Home » Diet and Nutrition » Train Your Brain For Healthy Eating

Can you learn to like healthy food?  Or after years of making poor food choices, are you programmed to crave fatty, sugary foods forever? A new but small study, by Tufts University, shows that is may be possible to train the brain to prefer healthier foods over processed high caloric foods.  Brain scans of adult men and women suggests that the addictive power of unhealthy food can be changed to increase preferences for healthy foods, according to scientists at the Jean Mayer USDA Human Nutrition Research Center on Aging (USDA HNRCA) at Tufts University and at Massachusetts General Hospital. By T Deckersbach et al, Pilot randomized trial demonstrating reversal of obesity-related abnormalities in reward system responsivity to food cues with a behavioral intervention,Nutrition & Diabetes, Sept. 2014.

“We don’t start out in life loving French fries and hating, for example, whole wheat pasta,” said senior and co-corresponding author Susan B. Roberts, Ph.D., director of the Energy Metabolism Laboratory at the USDA HNRCA, who is also a professor at the Friedman School of Nutrition Science and Policy at Tufts University and an adjunct professor of psychiatry at Tufts University School of Medicine. “This conditioning happens over time in response to eating – repeatedly! – what is out there in the toxic food environment.”

Scientists have suspected that, once unhealthy food addiction circuits are established, they may be hard or impossible to reverse, subjecting people who have gained weight to a lifetime of unhealthy food cravings and temptation. To find out whether the brain can be re-trained to support healthy food choices, Roberts and colleagues studied the reward system in thirteen overweight and obese men and women, eight of whom were participants in a new weight loss program designed by Tufts University researchers and five who were in a control group and were not enrolled in the program.

Both groups underwent magnetic resonance imaging (MRI) brain scans at the beginning and end of a six-month period. Among those who participated in the weight loss program, the brain scans revealed changes in areas of the brain reward center associated with learning and addiction. After six months, this area had increased sensitivity to healthy, lower-calorie foods, indicating an increased reward and enjoyment of healthier food cues. The area also showed decreased sensitivity to the unhealthy higher-calorie foods. 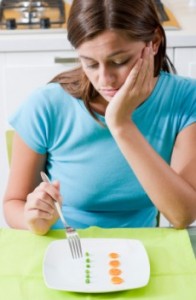 “The weight loss program is specifically designed to change how people react to different foods, and our study shows those who participated in it had an increased desire for healthier foods along with a decreased preference for unhealthy foods, the combined effects of which are probably critical for sustainable weight control,” said co-author Sai Krupa Das, Ph.D., a scientist in the Energy Metabolism Laboratory at the USDA HNRCA and an assistant professor at the Friedman School. “To the best of our knowledge this is the first demonstration of this important switch.”  The authors hypothesize that several features of the weight loss program were important, including behavior change education and high-fiber, low glycemic menu plans.

Objectives: Obesity is associated with hyperactivation of the reward system for high-calorie (HC) versus low-calorie (LC) food cues, which encourages unhealthy food selection and overeating. However, the extent to which this hyperactivation can be reversed is uncertain, and to date there has been no demonstration of changes by behavioral intervention.

Subjects and methods: We used functional magnetic resonance imaging to measure changes in activation of the striatum for food images at baseline and 6 months in a pilot study of 13 overweight or obese adults randomized to a control group or a novel weight-loss intervention.

Results: Compared to controls, intervention participants achieved significant weight loss (−6.3±1.0 kg versus +2.1±1.1 kg, P<0.001) and had increased activation for LC food images with a composition consistent with that recommended in the behavioral intervention at 6 months versus baseline in the right ventral putamen (P=0.04), decreased activation for HC images of typically consumed foods in the left dorsal putamen (P=0.01). There was also a large significant shift in relative activation favoring LC versus HC foods in both regions (P<0.04).

Conclusions: This study provides the first demonstration of a positive shift in activation of the reward system toward healthy versus unhealthy food cues in a behavioral intervention, suggesting new avenues to enhance behavioral treatments of obesity.

“Although other studies have shown that surgical procedures like gastric bypass surgery can decrease how much people enjoy food generally, this is not very satisfactory because it takes away food enjoyment generally rather than making healthier foods more appealing,” said first author and co-corresponding author Thilo Deckersbach, Ph.D., a psychologist at Massachusetts General Hospital. “We show here that it is possible to shift preferences from unhealthy food to healthy food without surgery, and that MRI is an important technique for exploring the brain’s role in food cues.”

“There is much more research to be done here, involving many more participants, long-term follow-up and investigating more areas of the brain,” Roberts added. “But we are very encouraged that, the weight loss program appears to change what foods are tempting to people.”

Additional authors of this paper from the Energy Metabolism Laboratory at the USDA HNRCA are Lorien E. Urban, Ph.D., and Taylor Salinardi, a graduate of the Friedman School. Co-authors from Massachusetts General Hospital are Alexandra M. Rodman, Amanda R. Arulpragasam and Darin Dougherty, M.D.

This study was supported by the US Department of Agriculture under agreement no. 58-1950-0-0014 and a pilot grant from the Jean Mayer USDA Human Nutrition Research Center on Aging at Tufts University.