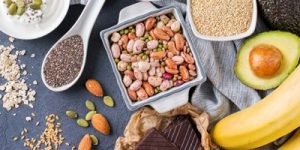 Health benefits of magnesium
for bones

One of the health benefits of magnesium is strong bones. A study on magnesium for bones, published in the Journal of Clinical Endocrinology and Metabolism, focused on teen girls whose daily dietary intake of magnesium was less than 220 milligrams. Half of them got a placebo; the other half got 300 milligrams of magnesium oxide for a year. At the end of the study, the girls who took magnesium had significantly higher bone mineral content, especially in the hips, than at the beginning of the study.

Health professionals are trying to educate the public about the health benefits of magnesium. According to Dr. Nan Kathryn Fuchs, who publishes the Women’s Health Letter newsletter, it’s not more calcium you need for strong bones; it’s magnesium. Although the government has raised the RDA for calcium from 500 milligrams to 1,000 milligrams a day, and U.S. women have one of the highest levels of calcium intake in the world, osteoporosis has gone up instead of down. The problem isn’t too little calcium but too much. In order to be absorbed, she says, calcium must be taken with magnesium, yet experts estimate that most American women are deficient in magnesium.

You should take twice as much magnesium as calcium, says Dr. Fuchs, because the health benefits of magnesium include:

Easing constipation is one of the health benefits of magnesium.  If your body has too little calcium and magnesium, you may have inadequate peristalsis, which is that automatic pushing you feel, those automatic contractions that happen during a bowel movement. Peristalsis moves food through the large intestine, so if you are deficient in calcium and magnesium, this function may slow or stop, causing constipation.

It has long been known (Harvard research, decades ago) that taking magnesium along with vitamin B6 significantly reduces the formation of calcium oxalate kidney stones. Jonathan Wright, M.D., recommends 300 milligrams of magnesium citrate and 100 milligrams of vitamin B6, daily.

A study of 42,000 men found that magnesium may help prevent gallstones. The study subjects who got at least 453 milligrams of magnesium a day had a 30 percent lower risk of developing gallstones than those in the study who got only 262 mg of magnesium.

Magnesium as treatment for heart attack

Intravenous magnesium, when given as soon as possible after a heart attack, decreases death rate, says Julian Whitaker, M.D. In a British study, 2000 heart attack victims had either IV magnesium sulfate or a saline solution within 24 hours of a heart attack. Patients who got the magnesium had 24 percent fewer deaths. One to five years later, the cardiovascular death rate was 21 percent lower in those who had the IV magnesium.

Health benefits of magnesium include relaxing the airways, acting as a bronchodilator for asthma. Even if epinephrine and steroids don’t work, intravenous magnesium can work.  The majority of emergency room doctors know about the research supporting IV magnesium for asthma attacks, but a 2006 survey showed only 2.5 percent of patients seen for acute attacks were given IV magnesium.

Health benefits of magnesium
for diabetes

Diabetes education on the health benefits of magnesium often neglect to include it in diabetes information. Here is what you should know about diabetes and magnesium: Swedish scientists reviewed studies on magnesium and risk of diabetes and found that for every 100 milligrams of increase in magnesium daily intake, there was a 15 percent decrease in the risk of developing type 2 diabetes. If you already have diabetes, you probably know that high blood sugar increases urination, which can result in urinating way vital vitamins and minerals, including magnesium. Unfortunately, magnesium deficiency makes controlling blood sugar more difficult and also increases risk of diabetic complications. Studies show that individuals with magnesium deficiency are the most likely to have severe diabetic retinopathy.

A combination of magnesium, calcium, potassium and vitamin E can stop leg cramps. Health benefits of magnesium include strong muscles as well as strong bones. A study published in the American Journal of Clinical Nutrition shows that magnesium helps keep muscles strong. The study, done at the University of Palermo in Italy, investigated the connection between sarcopenia, which is loss of muscle mass, and magnesium deficiency. The researches measured serum levels of magnesium in the 1,138 volunteers and did tests on muscle strength and function. The result? A strong link between magnesium levels and muscle strength. The volunteers with higher levels of magnesium had stronger handgrips, more power in their lower legs, and were able to extend their knees and ankles with more force.

Health benefits of magnesium
for high blood pressure and hypertension

Among the health benefits of magnesium may be the regulation of blood pressure. Most hypertension is caused by mineral deficiencies, according to Robert J. Rowen, M.D. He recommends potassium and magnesium aspartate, about 100 milligrams each, one to three times daily. (NOT for people with kidney disease, he says.) Rowen cites a study of 104 subjects with mild to moderate hypertension. Half the group received 30 mmol/day of postassium aspartate orally, while the control group received nothing. In the control group, there was no change. In the potassium aspartate group, there were significant reductions in blood pressure.

Rowen also says that magnesium may be important to regulating blood pressure. He refers to the DASH study (Dietary Approaches to Stop Hypertension), a human clinical trial. Results indicated that high blood pressure can be significantly reduced by increasing fruits, vegetables, and low-fat dairy foods in the diet. Eating more of these foods would increase magnesium, potassium and calcim in the diet, while lowering sodium and fat.

In another study of 30,000 U.S. male health professionals, results showed a lower risk of hypertension with an increase in foods that provide magnesium, potassium and dietary fiber.

One of the reasons that magnesium lowers blood pressure, says Julian Whitaker, M.D., is that it relaxes the smooth muscles that dilate the arteries. A 2009 Korean study found that those in the study who took 300 milligrams of magnesium a day for three months had significant reduction in blood pressure readings compared to those who took a placebo. Systolic/diastolic pressures fell 17.1/6.7 mmHg for those who took magnesium and only 3.4/0.8 in the placebo group. Whitaker also says that a “meta-analysis” of 20 clinical trials showed that for each 240 milligrams of magnesium taken, subjects blood pressure dropped by an average of 4.3/2.3 mmHg.

Healthy adults need 400-500 mg a day, but people with hypertention, arrhythmia, heart disease, asthma, diabetes or migraines can take 500 to 1000 mg daily. Remember, magnesium can cause diarrhea, so take it “to bowel tolerance.”

Here’s a surprising revelation among the health benefits of magnesium: Women with urinary urge incontinence (also called overactive bladder) may benefit from taking magnesium supplements. In a study reported in Family Practice News (February 1, 2003), 60 women with overactive bladder were divided into two groups, one receiving a placebo and the other group receiving 350 milligrams of magnesium hydroxide daily for one month. Twelve of the 30 in the magnesium group reported improvement in their overactive bladder in one month, along with significantly fewer incidents of urge incontinence, less frequency of urination, and fewer times of being waked at night to urinate. As relatively small amounts of supplemental magnesium effectively relieved urge incontinence in the new study, it is likely that suboptimal dietary magnesium intake is one of the causes of this disorder.

For a long time, we have known that magnesium is important to proper functioning of the brain. A few years ago, however, researchers at MIT formulated a new kind of magnesium supplement that stopped or even reversed neurodegeneration. This special supplement, magnesium-L-threonate, or MgT, improves synaptic plasticity and density, which are the foundations of memory and learning. It does this because, unlike other forms of magnesium, it can reach the brain in large quantities.

Magnesium-L-threonate for PTSD, anxiety and depression

Referring to the section just above this one, the MIT researchers also discovered that magnesium-L-threonate can help those with post-traumatic stress disorder (PTSD). MgT helps the the brain block the return of old fear memories. Because of these findings, the researchers now recommend elevating brain magnesium with MgT to dampen traumatic memories and treat PTSD, anxiety, and depression. Read the article. The section on PTSD, etc., is at the end.

To enjoy the health benefits of magnesium, consume good dietary sources of magnesium, which include nuts (especially almonds), whole grains, wheat germ, fish, and green leafy vegetables. Approximately 80% of the magnesium is lost when whole grains are refined to white flour. Processed foods typically are low in this mineral, and as many as three-quarters of Americans consume less than the Recommended Dietary Allowance for magnesium.

Too much of a good thing?

There are more health benefits of magnesium, and I will be adding them to this page. Magnesium is inexpensive and generally safe, although people with kidney failure should be closely monitored by their doctors while taking magnesium supplements.

Magnesium has hundreds of known functions in the body and is absolutely essential to good health. In doses too large for your body, however, it does have the side effect of  pushing the contents of your intestines through your body faster than normal, which can result in loose stools or even diarrhea. So, you could be taking magnesium for its good effects but fail to absorb it because it’s moving through too quickly for absorption. Most people can tolerate 200 to 600 milligrams of magnesium daily. If you start having the bowel problems described, cut back.

Here’s another reason to focus on the health benefits of magnesium: A study released in April 2008 indicates that magnesium deficiency accelerates aging. Magnesium is essential for healthy muscles, nerves, bones and normal heart rhythm. Lack of magnesium increases risk of cardiovascular problems, hypertension, diabetes, osteoporosis, and some cancers.

Unfortunately, studies have shown that more than half the U.S. population is magnesium deficient, due to poor diet.

Researchers at Children’s Hospital Oakland Reserarch Institute in California found that with magnesium deficiency, cells age quicker and this may contribute to “long-term chronic disease.”  It’s possible that magnesium deficient cells reserve their energy for essential life functions at the expense of long-term functions.

The researchers lament that there is no easy way to tell if you are lacking magnesium. “You could be moderately deficient for a long time and not know it,” said one of the researchers.

More information on health benefits of magnesium and possible supplementation is given above. And be sure to include foods rich in magnesium, which include nuts (especially almonds), whole grains, beans, spinach, and other green vegetables.

This article was condensed from the Alternative Medicine Digest for Dr. David Jensen