Scientists recently reviewed curcumin, a chemical compound found in turmeric, and established that it is a safe and promising treatment for inflammation-driven diseases. This international review considered past clinical trials and concluded curcumin was a safe and effective molecule. Published in Molecules, Vol. 20, Issue 2.

The evidence is growing that curcumin, the substance in tumeric, should take a bigger role in the human diet for its ability to act as an antioxidant, anti-inflammatory and lipid lowering agent. Western Australian researcher, Gautam Sethi, from Curtin University (Australia), and his colleagues see strong potential, based on this scientific review of past clinical trials, for curcumin and cancer. To date the studies are small in scope, but Sethi and his team see evidence for larger studies.

ABSTRACT: Despite significant advances in treatment modalities over the last decade, neither the incidence of the disease nor the mortality due to cancer has altered in the last thirty years, according to a new research review in curcumin. The researchers cite that available anti-cancer drugs exhibit limited efficacy, are associated with severe side effects, and they are also expensive. Thus identification of pharmacological agents that do not have these disadvantages is required. Curcumin, a polyphenolic compound derived from turmeric (Curcumin longa), is one such agent that has been extensively studied over the last three to four decades for its potential anti-inflammatory and/or anti-cancer effects.

Curcumin has been found to suppress initiation, progression, and metastasis of a variety of tumors. These anti-cancer effects are predominantly mediated through its negative regulation of various transcription factors, growth factors, inflammatory cytokines, protein kinases, and other oncogenic molecules. It also abrogates proliferation of cancer cells by arresting them at different phases of the cell cycle and/or by inducing their apoptosis. The current review focuses on the diverse molecular targets modulated by curcumin that contribute to its efficacy against various human cancers. 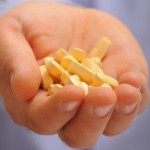 Curtin University adjunct research fellow Gautam Sethi says most diseases, including cancer, are caused by the deregulation of multiple genes. “To treat cancer you need multi-targeted agents, better than mono-targeted agents, which have been used for the past few years,” Associate Professor Sethi says. “Multi-targeted agents are those that target more than one deregulated oncogenic signaling cascades—they are more effective in treating cancer as it has been found that several genes are mutated in a given cancer. “We can modulate several of such oncogenic genes, which are deregulated in cancer using curcumin.”

A/Prof Sethi says curcumin is exceptionally effective for multiple myeloma patients and those suffering from the particularly lethal pancreatic cancer, for which there are no drugs. However, curcumin was not found to be as effective in breast cancer patients being treated with the chemotherapeutic agent cyclophosphamide. According to the research, curcumin can counteract the effect of cyclophosphamide.

A/Prof Sethi says curcumin is possibly the only drug that can be given at high doses—up to 12g—without any toxicity. “It can target most of the oncogenic proteins like NF-kB, STAT3, AP-1,” he says.

A/Prof Sethi says the only known side effect of the agent is blood thinning, and therefore advises against taking curcumin if undergoing surgery. A/Prof Sethi says it would be ideal to combine curcumin with other drugs or natural compounds, like piperine, an alkaloid found in pepper to increase its bioavailabilty.

“If we combine it with piperine we see viability increase by 2000 per cent 45 minutes after administering the curcumin,” he says. A/Prof Sethi says there is a lack of data to explain the underlying mechanism of its effect, however, it is known for its anti-inflammatory effects. “It has been shown that most chronic diseases, including cancer, are caused by inflammation and can be treated by anti-inflammatory agents.”

A plethora of in vitro and in vivo research together with clinical trials conducted over the past few decades substantiate the potential of curcumin as an anti-cancer agent. At the molecular level, curcumin targets numerous pathways, highlighting its ability to inhibit carcinogenesis at multiple levels and thus, potentially circumventing the development of resistance. However, there is a paucity of data to explain the underlying mechanism of its activity. Clinical trials with curcumin indicate safety, tolerability, non-toxicity (even up to doses of 8000 mg/day), and efficacy. These studies provide a solid foundation for more well-controlled studies in larger cohorts as well as open avenues for future drug development. However, curcumin activity is limited by its poor bioavailability and some possible adverse effects. The development of formulations of curcumin in the form of nanoparticles, liposomes, micelles or phospholipid complexes to enhance its bioavailability and efficacy are still in its early stages. Nonetheless, curcumin has established itself as a safe and promising molecule for the prevention and therapy of not only cancer but also other inflammation-driven diseases.

This information was accessed through Medical Press and Pub Med.