Whereas, prescription opioid use and abuse leading to addiction and catastrophic outcomes has become a national crisis; 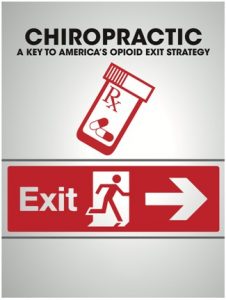 Whereas the leading cause of injury death in the United States is drug overdose, and a majority of the deaths from drug overdose deaths involved an opioid; Whereas from 1999 to 2014, more than 165,000 people — three times the U.S. military deaths during the twenty years of the Vietnam War — have died in the U.S. from overdoses related to prescription opioids;

Whereas overdoses from prescription opioids — drugs like oxycodone, hydrocodone, Percocet and methadone – are a driving factor in the 15-year increase in opioid overdose deaths;

Whereas the newest estimates on the cost of opioid abuse to U.S. employers is estimated at $18 billion in sick days, lost productivity and medical expenses;

Whereas prescription opioids are often recommended for low back, neck, and musculoskeletal pain management;

Whereas over 100 million suffer with chronic pain and an estimated 75 to 85 percent of all American will experience some form of back pain during their life time;

Whereas doctors of chiropractic are educated and trained to effectively address spinal and skeletal pain with non-surgical, non-drug management;

Whereas numerous published studies document chiropractic manipulation as effective for the management of neck and back pain;

Now, therefore, be it resolved, That September 2017 be declared Drug-Free Pain Management Month, to raise public awareness that chiropractic care is the primary first-line, non-pharmacologic approach to safely and effectively relieve acute, subacute and chronic pain.

This resolution was condensed from a Foundation For Chiropractic Progress circular for Dr. David Jensen.  Contact him at the the WIN Health Institute for more pain management information.